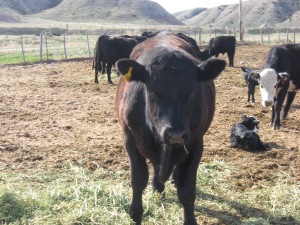 I’ve been laid up, with five busted ribs, for one week, two days and nine hours thinking, “what is funny about being run over by a Mama Cow?”

I have thought of the scene as a comedy, though, only over the past eight hours, because sleep comes slow when unable to lie flat upon a bed.

Looking back, the comedy began on day nine. I was finally able to put on, and wear my bra. (No, not my teenage daughter’s sports bra.)

Truthfully, there is nothing funny about the incident. Pregnancy testing 400 Mama cows one week, two days and ten hours ago, I took the “dummies” job (No offense, Eddie.) of encouraging the Mamas into the ally to then be trapped into the squeeze-shoot.

This description implies that no living creature would go “willingly” into such a contraption. Therefor, the Mamas required, some, persuasion.

Most Mama cows are willing and well-practiced in the process of “preg-checking”, as they have frequented the squeeze-chute on multiple occasions over their lifetimes and have been members of our family for over a decade.

There are a few defiant old gals that refuse, even when asked nicely!

The Mama that tried to kill me was not of the later pedigree, though. She was not a big cow; a black-bald faced lady, with short legs and quiet gentle eyes. I know, because I looked right into them!

She was scared, not mean. I like to imagine that we were simply trying to dance. Perhaps the waltz, or the two-step. Mostly likely, we were doing the polka, though probably the tango. 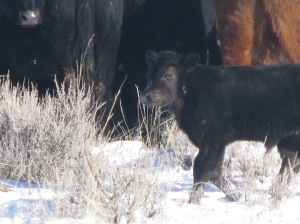 How ever I went down, I went down without remembering much of the dance. I only know that we squared shoulders, looked deep into each other’s dark eyes and then I was sitting in the Cadillac asking for information.

The good new is: I’m alright. Lucky for me, her legs were short and she kicked me in the side, not the head. Though, I imagine I was mostly trampled. I’m on the mend, and that little Mama will be part of the family another year, because she is pregnant.

And for me, I have no intentions of living up to my new native title, Dances With Cows.

One thought on “Is There Comedy In It?”